Hey everyone! I had a quick question about how long Otonashi was in the "Afterlife". Does anyone know? I know Shiina was there for 100 years and Yuri and Hinata were there for 70 years but how many years did the anime last/ Otonashi's stay? Thank you!

To consider the longevity of Otonashi's time in the Afterlife is very inaccurate as in 'Another Epilogue', Otonashi is shown to be the Student Council President helping others to be obliterated. It is entirely possible that the reason he stays is because he feels that he needs to ensure that anyone who arrives in the Afterlife have the same understanding that Him, Kanade and the Afterlife Battle Front had about moving on. Possibly the student in the class turns to rebellion like Yuri does, thus a circle occurs where he becomes Angel. It is also possible that he stays there a while longer so that he doesn't forget everyone.

From analysing the Epilogue, I understand that he has been there a long time, thus it explains his changed personality. In the last moments a student says ' Rumour has it that he is waiting for someone' which at first I was wondering was an indication that he is the coder almost as a loop, or mabye waiting for Kanade.

HOWEVER I REALISED THAT IT IS POSSIBLE THAT HE IS WAITING FOR HIS SISTER TO COME THROUGH so that he can spend time with her. Also the length of his stay is indicative as it is apparent to me that the teacher is not an NPC because he says ' you. Get back to your seat'. NPC's have never done that, and that is apparent in the Anime as the teacher never complains about how they are acting in class.

To conclude, Otonashi's time spent is incalculable because of these factors

1: We don't know the date when they passed away

2: Dimensional Exchange(Time it takes to get between the After Life and the universe)

3: The date when he meets Kanade again.

His time is relative to Kanade's time because they are tied together because of the love they share. His destiny is also relative to those he was close with, so eventually they will all meet

And although it can't be measured, the length is certain.

If we consider what holds Otonashi back, it may be that he wants to make sure that people know how to be obliterated so their spirits can be free, almost like passing the baton, or rather the role as 'Angel'. Because he understands the meaning of being free, he finds it is important that new spirits understand that. A selfless move, but mabye it is the resolve he needed. It may also be that he may expect his sister, and he manages to be free once he has been with her and ensured she is happy as he knows that he has done everything he could do. At that point, he is ready to move on as he is at peace with his sister.

Now this is something that I now think is the best description of this, alongside 'SSS' mk 2. The Otonashi equivalent in the story is his sister who joins the 'SSS' to defy 'Angel Otonashi' only to figure out that he is her brother.

Thank you for reading!!

Please reply to this if you still use Fandom and have a great day!

(here is a timeline of all writings and Anime) 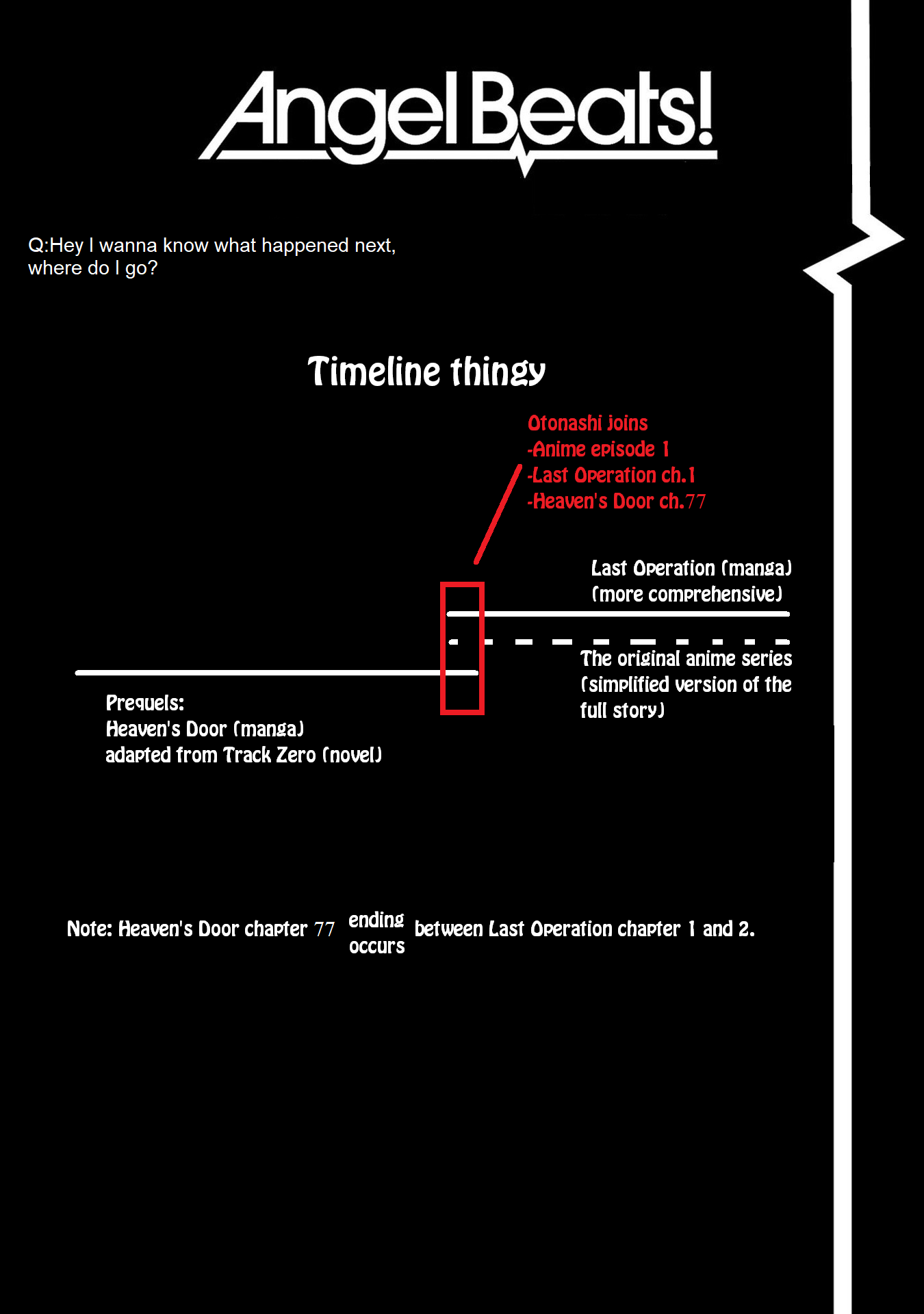 To edit, he possibly could have been there for over 20 years easily

Let me tell you he DID NOT STAY like others, even he left after kanade(tenshi).

Why, Click on the link below to clear this doubt

Did Otonashi pass on from the afterlife worldAnime World

What do you think?