Eri Shiina (椎名 枝里 Shiina Eri) is a member of the Afterlife Battle Front and a "self-proclaimed female ninja" who fights with traditional Japanese weapons such as dual-wielding kodachi and shuriken. She acts as one of the front liners of the club and is an enigmatic character whose past is covered in mystery.

Shiina, like all of the members of the Afterlife Battle Front, wears the group's special seifuku, along with a long black scarf covering the bottom part of her face and her neck (usually seen during operations). Her skirt is slightly different from the usual, as it has two short slits which are probably to aid her in movement. She is also the only female character who has short sleeves. Shiina wears black coloured arm guards on the back of her palm that extend to her elbows, as well as lower thigh guards. Black bandages can be seen under those guards, right below her knees and near her elbows. Her weapons are tucked into 2 slots on her back, hooked by a belt-like strap. Her shirt is often left unbuttoned at the bottom.

Despite having dark blue hair, during certain episodes (e.g. episode 2 Operation Descend), her hair is seen as black with reddish-burgundy colored eyes.

Shiina usually puts up a tough and quiet front, but she is extremely fond of cute things, especially stuffed animals, even though it may be a set-up or a trap of the enemy. It also seems that she is overprotective of the stuffed animals she has, and she often mistakes them for real animals which leads her easily into traps.

She is able to sense when danger is coming. She is good when it comes to concentrating and is very strict in her training and would continue with her training even when she is needed to do something else. Shiina's training mostly consist of balancing objects such as broomsticks, scissors, and mops on her fingertip, sometimes balancing one on each of her fingers simultaneously while doing something else. She also says in the later episodes that Yuzuru Otonashi should consider the fact that when she's fighting or in battle with them she makes the team seem like it's 100 men stronger.

She also usually says the phrase "how shallow-minded" (あさはかなり, asahaka nari) when she remarks on her colleagues' actions. But in the English Dubbed version her phrase has been translated as "this is so stupid" instead.

In the Anti-Angel Headquarters, Shiina is often seen at the corner of the room covered by the room's shadows.

Shiina shares a sense of comradery, seen in 1st Beat where if the player decides to save Fujimaki from drowning in the Guild but moves on as he will drown regardless, she will comment on how refusing to abandon him was admirable.

There are occasions where Shiina is often seen in an excited manner, smiling, or even laughing. Some of those occasions could be due to certain events, or when she is engaged with activities that include other people. At one point, she engaged in an activity and claimed that it was fun.

Surprisingly, Shiina also seems to have an embarassed side. When she was involved with an operation to attend a beauty pageant, she wore a kimono. Blushing, she asked how it looks on her. She also couldn't believe that she could wear such a thing.

Much of Shiina's past remains unknown, and she heavily implies that she came from the past (a.e Feudal Japan), where she worked as an assassin who was trained continuously to kill people using her skills which she had honed over time. Her training has caused her to show little regard to her identity, only calling herself by the callsign "C7" and not even thinking of naming herself otherwise. It's currently unknown how Shiina died and when she ended up in the Afterlife that even the Manga fails to explain, and it remains a mystery what her regret was to cause her to end up in the Afterlife. She obviously suffers from a slight culture shock as she is unable to differentiate from a fake electronic dog to a real one; since she was born in Ancient Japan and does not understand modern day technology.

This section contains spoiler content from the manga Heaven's Door.

Before joining the SSS, she lived in the deepest point of an underground system of passageways located just outside the perimeter of the Afterlife School. She was first discovered by Noda, and later by Yuri and Hinata in an exploratory trip in the underground.

Shiina's first encounter with the SSS was with Yuri and Hinata. However, this meeting ended disastrously for Yuri and Hinata, as Shiina attacked without even providing a prologue speech, which they expected Shiina to do as a final boss of sorts. Furthermore, she proved to be more than a match for the duo. As a result of this, both Hinata and Yuri were forced to retreat, though it still didn't prevent their respective deaths. This would have continued had Hinata not managed to restrain Shiina by sacrificing himself, allowing Ooyama, Chaa, and Noda to rescue them and capture Shiina. However, after Noda runs off forcing Chaa to chase him, Shiina manages to escape. This allows her to begin a relentless assault upon the remaining group, as they attempt to escape the underground.

After much struggle, the group manages to make it back to the Afterlife School where, to their surprise, Shiina is waiting for them. To further the astonishment of Yuri, Hinata, and Ooyama, Angel appears and protects the now defenseless group. During this time, they regroup with Chaa and Noda to form a counter-attack plan. Shiina finally faces defeat after being backed into a wall by Angel, Noda, and Chaa.

In the infirmary, Shiina is invited to become a member of the Afterlife Battle Front by Yuri, to which she cautiously accepts.

The Silent Arms of the Rebellion[]

This section contains spoiler content from the Angel Beats anime.
As Yuri continues with her plans to lure God, Shiina remains as one of the members of the Afterlife Battle Front, acting as its front-line offense whenever it is needed. However, she is not that active when it comes to less intense operations like Operation Tornado, even if Angel is involved.

After her recovery, Shiina joins the activities of the SSS, although she has minimal participation, particularly because of her puzzlement over the things they do. Yuri decides to guide her into the SSS, seeing as she is still confused over the world she is currently in. 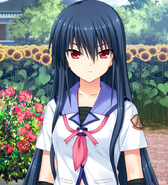 Shiina as she appears in the visual novel. Image from 1st Beat.

Back to back with Otonashi. Image from the anime.

Community content is available under CC-BY-SA unless otherwise noted.
Advertisement