Another Epilogue or Special Episode: Stairway to Heaven

The afterlife school is seemingly empty, and Yuri finds herself waking up in the infirmary. Hinata, Otonashi, Naoi and Kanade are still by her side, much to her surprise. Similarly, they are amazed at how she survived facing the mastermind behind the appearance of the shadows. Soon, the four become curious if Yuri has managed to get over her troubles; Yuri shows embarrassment towards the topic and hits Naoi twice for attempting to use his hypnotism to force the answers from her. Eventually, she admits that she has moved on from her regrets. Yuri is also relieved to hear Kanade call her by her first name.

Otonashi then switches the topic to something they prepared while Yuri was resting; after a quick change of clothes, Yuri joins the four to the gymnasium.

As they head off to Otonashi's surprise, Yuri notices that the other members of the SSS can't be seen elsewhere; Otonashi tells her that they have moved on as well, much to her relief. Also, Hinata tells her that Takamatsu has turned back to normal and has joined the rest of the SSS.

Upon their arrival in the gymnasium, the topic about Kanade's first time graduating is opened again and Hinata even tries to dispel Kanade's first impressions on it by saying that most of the time, girls who graduate end up crying. The topic soon shifts to Yuri, who was still wearing the uniform of the SSS; Yuri snaps at Hinata and Naoi and Otonashi notice how her behavior changed after the members of the SSS moved on. Hinata even comments that it made her cute; Yuri retaliates by hitting him repeatedly.

With everyone prepared, Otonashi starts the graduation ceremony for the Afterlife Battlefront.

Just like in any graduation ceremony, the program starts with the singing of the school hymn; in this case, it is replaced by the Afterlife Battlefront's hymn, with lyrics prepared by Kanade. Yuri starts at the sudden change of plans, but she ends up singing it nonetheless.

After the song, however, Hinata goes to complain because of the unusual lyrics (which include three lines of "Mapo Tofu"). Yuri, however supports Kanade, and Otonashi tells him that it's made by her best efforts.

With the anthem finished, the program heads to the awarding of the diplomas, led by the principal, or in this case, Hinata, whose loss in rock-paper-scissors made him the principal-for-the-moment. After the names of the four are called, Otonashi gives Hinata's diploma and they exchanged thanks.

When the awarding ceremony ends, Otonashi stands up and gives the address as the representative from the graduating class. On his speech, he recalls on how he arrived in the afterlife, meeting Yuri for the first time, fighting alongside the SSS, and how they, and the many experiences he had with them, had been very important to him, even after he regained his memories.

Otonashi then asks everyone to stand and sing "Aogeba Toutoshi". Everything seems fine at first, but as the song reaches its end, Naoi suddenly tells Hinata that his notes are late, causing a momentary argument before Otonashi cues for one last line before the song ends.

A short moment of silence passes, then everyone begins to laugh.

Otonashi brings the ceremony to a close.

Naoi goes to approach Otonashi, leaving first to keep him from seeing any womanly tears, but ironically, he is in tears. He sincerely thanks Otonashi for what he did to bring peace into his heart; with one last bow of gratitude, he disappears.

Hinata then jokingly asks who will cry next; Yuri tells that no one will be crying, and she then turns to Kanade. Yuri tells her how regretful she was for not making time for the two of them to be friends and asks for forgiveness. She then hugs Kanade tight and before leaving, turns to Otonashi and Hinata, who in turn give out their thanks to her. As if running elsewhere, Yuri turns back and waves, then... she is gone.

With Otonashi, Hinata and Kanade left, Hinata decides to go next. Otonashi, however, wants to go next, but Hinata insists, reminding him that he should not leave Kanade behind. Hinata then proceeds to extend his thanks to Otonashi for making everything possible. Otonashi, however, tells him that his emergence in the afterlife is plainly by chance; he admits that he has found fulfillment in his life, but due to losing his memories, he ends up in the afterlife. He also adds that he is relieved to have used that chance to help others.

Hinata then shifts the topic back to his farewell; Otonashi asks Hinata to says hi to Yui for him, which he agreed, and after an exchange of high-fives, Hinata disappears.

Otonashi and Kanade are the ones left.

Otonashi asks her about her feelings about the graduation ceremony, and they go outside by his request.

The two soon settle down on the staircase leading to the school field. Otonashi then takes the time to give Kanade a request: to stay with him so that he can be able to help others the same way they helped SSS. He feels that why he came in the afterlife was to bear that responsibility.

After that, as Kanade moves past him, Otonashi tells her "I love you."

Kanade did not say anything.

Otonashi asks why, and Kanade tells him that she would disappear if she would tell him her feelings. She also adds that she wants to thank him. Confused, Otonashi listens as Kanade reveals that she was one of the recipients of Otonashi's organ donations, and his heart was the reason that she lived for some time. And because of her urge to thank the one who saved her life, she wandered in the afterlife.

She also revealed some details regarding his stay in the afterlife, that Otonashi had no heart when Kanade stabbed him the first time that they met, and Otonashi regained his final memories because he was so close to his own heart. With that revelation, Kanade asks Otonashi to tell her again those words he told her. He hesitates, in fear of losing Kanade in the process. Kanade assures him and tells him that it was the only way for her to realize that living is a beautiful thing.

Otonashi grabs Kanade and repeatedly tells her "I love you" and asks her to be with him forever; Kanade thanks him in every time he says those words, and in a split second, she was gone.

With Otonashi alone for the first time, he couldn't cope with the fate and shouts out Kanade's name before passing on soon after.

A girl with a dress and short silver hair leans back on the wall of a building, humming the melody of Iwasawa's last song, "My Song". Meanwhile, a boy with short red hair passes by and stops when he hears the tune.

And when the girl prepares to leave, the red-haired boy runs to reach her, and... 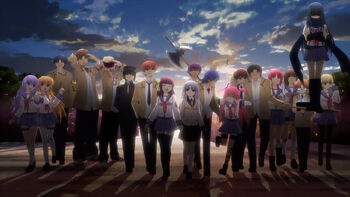 Kanade: "If I tell you how I honestly feel, I think that I will vanish."

Otonashi: Is that true Yuri? (that she has overcome the feeling that was keeping her in the afterlife)

Naoi: Fine, then I'll hypnotize you to- (Yuri throws sheet over Naoi)

Yuri: OH HELL NO! YOU GET AWAY FROM ME!

Hinata: We know what reaction that shows he hit: the bullseye.

Yuri: N-no thats not true! It'd be a joke if your leader got over it that easily, right?, I mean what kind of commander would I be if that happened?

Naoi: Then I'll hypnoti-! (Yuri throws pillow in his face with force)

Otonashi: Next, we shall hand out diplomas!

Yuri: You actually have some?

Otonashi: We made them! Kanade did most of the work.

Yuri: Is the principal going to present them?

Hinata: I AM! (with bald cap, glasses, and fake mustache) HAHAA!

Hinata: DAMMIT I LOST AT ROCK PAPER SCISSORS! GOT A PROBLEM? DAMMIT, WHY DOES THIS ALWAYS HAPPEN TO ME?! IT SUCKS! I MEAN EVERYTIME I PLAY THAT GAME IM A LOSER!

Naoi: (crying) Otonashi, Otonashi if I had never met you I, I never would have made peace. But-But I- I'll never be lost again. I know my way now. Thank you so much!

Otonashi: Hehe! Get out of here kid.

Kanade: I noticed when I stabbed you the first time, that you, that you didn't have a heart. You regained all of your memories when you fell asleep on top of my chest. You were listening to the rhythm of your own heartbeat. Yuzuru, please. tell me, repeat what you just said.

Kanade: Yuzuru! Please let me believe in everything you believed in. Let me believe that, life is worth living. Yuzuru.

Kanade: Truly and deeply, thank you for giving, my life to me. (Kanade disappears.)

Retrieved from "https://angelbeats.fandom.com/wiki/Graduation?oldid=14590"
Community content is available under CC-BY-SA unless otherwise noted.