Angel Beats! Heaven's Door (エンジェルビーツ! ヘブンスドアー, Enjeru Bītsu! Hebunzu Doa) is a manga series adaptation of the Angel Beats! Track Zero light novel. The series is illustrated by Yuriko Asami, and was first released in the May 2010 issue of the Dengeki G's Magazine. It is later published under ASCII Media Works' Dengeki Comics imprint.

Seven Seas Entertainment has licensed the manga with the first volume to be shipped on February 9, 2016.

Heaven's Door, like Track Zero, acts as a prequel to the anime series. It takes place during the time when Hinata is in his early days as a student and later, becomes the co-founder of the Shinda Sekai Sensen (SSS), an organization formed to take revenge against God. The story later expands on Track Zero, showing the lives of more of the members of the Shinda Sekai Sensen before Yuri's formation of the said group.

Hideki Hinata
The main character and a newcomer in the afterlife. After dying in a vehicular accident, Hinata stumbles upon the afterlife, where he is taken by Yuri in her elaborate plan to pay back her painful experiences in life.

Yurippe/Yuri Nakamura
An inhabitant in the afterlife who harbors intense feelings of revenge against God for her past experiences when she was still alive. She forms the Shinda Sekai Sensen with Hinata and other students she recruited to push through her plan to confront God herself.

Ooyama
A shy boy who eventually becomes Hinata's roommate and close friend. He has a personality that barely stands out from the others in the afterlife.

Kanade Tachibana/Angel
The Student Council President in the afterlife, tasked with enforcing various school rules. She possesses a mysterious set of abilities called Guard Skills that she uses in combat. The nature of her ability has earned her the nickname "Angel" amongst the members of the SSS and also turned her into a vital target for SSS operations.

Chaa
Despite looking like a gruff middle-aged man, Chaa is also a student in the afterlife. He introduces the concept of firearms in the afterlife and became a short threat to Yuri's group before deciding to join her cause.

A student that believes himself to be the main character of a video game. He instantly became a part of the group after getting the invitation from Yuri, and also developed a crush on her. He became somewhat close to Hinata and Ooyama, serving as the aggressive member of the little trio. 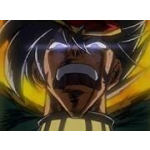 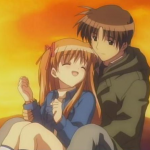