"My Most Precious Treasure" (一番の宝物, Ichiban no Takaramono) is a song by various artists from the Angel Beats! franchise. Three separate renditions of this song exist: Yui's version, the original version, and Yui's final version. Yui's version was used as an ending theme for Episode 10 of the anime series. It was released as an album track for the album "Keep the Beats!" and is sung by Girls Dead Monster feat. LiSA. The original version was played in the final episode and is sung by karuta. The song was released in the Angel Beats! Original Soundtrack. A third version of this song, "Yui's final version," was released as a separate single at the termination of the GDM project and was again sung by LiSA.

Episode 10 and 13 each uses "My Most Precious Treasure" as the ending theme, but the lyrics in each version are made to sound slightly different so that they would closely match the theme of each episode. The Episode 10 version (Yui's ver.) is a love song that tells of a girl who must be separated from a loved one (most likely a boyfriend). Even though the girl (i.e., the singer) is saddened by the potential loneliness of this parting, she nevertheless makes up her mind to depart out of her own will, carrying with her only the memories from past experiences, which she will retain as her "most precious treasure." While this song plays in the background at the end of Episode 10, we see on the screen a few stills of Hinata, Yui and Yui's mother in a hypothetical scenario (perhaps depicting their next lives). In this imagined scenario, we see that Hinata becomes friends with Yui and eventually begins to care for her.

The Episode 13 version (the original version) seems to focus on similar themes but places stronger emphasis on the general aspects of life, in all a positive one that seems to be the central unifying theme of the series. This version is again told from the perspective of someone who must part ways with his/her past experiences and move onto a new path. Likewise, the singer decides that he/she will only move forward, despite the potential losses that might accompany this decision. Compared with the Episode 10 version, the song focuses on a broader range of themes including friendship and strife. For instance, at the end the singer decides that no matter how terrible life might seem, he/she must make an effort to stay alive, and that memories of past love/friendships will always stay with him/her as the "most precious treasure." The themes explored in this song are reminiscent of what the scenario writers had intended to depict as the "Rebels Against God," a signature alias of the SSS. While the song plays in the ending credits of the Final Episode, the SSS cast members gradually disappear one by one, suggesting that they have at last fulfilled their purposes in life and that their fight against god has at last come to an end. 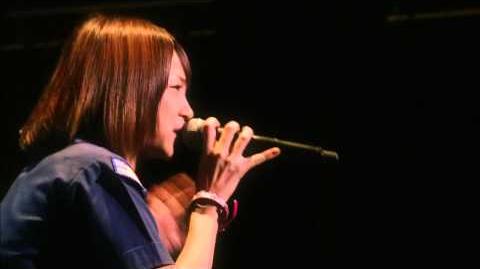 Retrieved from "https://angelbeats.fandom.com/wiki/My_Most_Precious_Treasure?oldid=15515"
Community content is available under CC-BY-SA unless otherwise noted.