Heaven's Door
"TK" is a mysterious character who speaks in semi-nonsensical English quoted from pop culture depending on the situation of the scene. He saves the team many times and does know some Japanese but rarely speaks it, and it seems he understands what the others say to him. And he is talented in almost anything (mostly in dancing). He was always seen dancing even though fighting his enemies. His real identity and his name are unknown to characters in the show, even to the SSS, so they identify him as "TK", a nickname given to him by Noda. However behind character names in the opening sequence their Romaji name can be seen written in faint letters, and behind "TK" it says "Thei Kai".

One particular trait of his is his inability to remain still, as he is in constant movement whenever he is not doing anything at all (although at times he can be seen not in constant movement). His catchphrases appear to be 'Just a wild heaven' and 'kiss you'.

He is a tall young man with blond hair wearing a red scarf on his forehead (which represents that he is a mysterious character). Not having the SSS uniform, he has a large dark-red bandanna that practically hides his eyes (Shown for a brief instance in Episode 10 during the 5 on 1 soccer match against Yui). He has also two small earrings on the sides of both his ears and a "necklace" that holds of a pair of handcuffs.

Throughout the series, TK has said these in English:

Most of these catchphrases are actual lines of songs, mostly from bands TM Network and B'z, rock bands from the late '80s to the present. 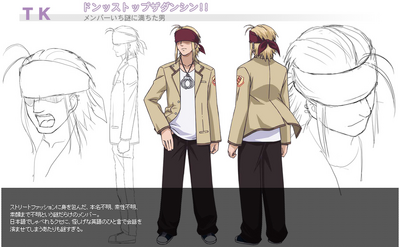 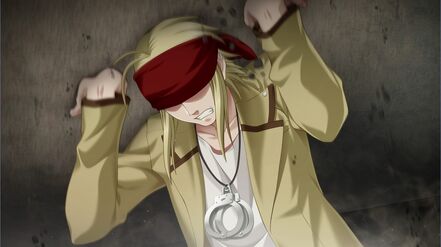 Letting them through. Image from 1st Beat.
Community content is available under CC-BY-SA unless otherwise noted.
Advertisement